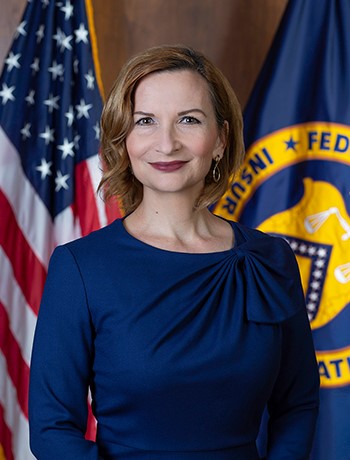 Jelena McWilliams was sworn in as the 21st Chairman of the FDIC on June 5, 2018. She serves a six-year term on the FDIC Board of Directors, and is designated as Chairman for a term of five years.

Prior to joining Fifth Third Bank, Ms. McWilliams worked in the U.S. Senate for six years, most recently as Chief Counsel and Deputy Staff Director with the Senate Committee on Banking, Housing and Urban Affairs, and previously as Assistant Chief Counsel with the Senate Small Business and Entrepreneurship Committee.

Ms. McWilliams graduated from the University of California at Berkeley with a B.S. in political science, and earned her law degree from U.C. Berkeley School of Law.