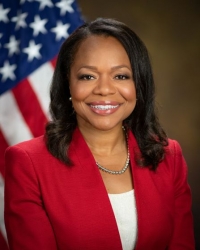 Kristen Clarke is the Assistant Attorney General for Civil Rights at the U.S. Department of Justice. In this role, she leads the Justice Department’s broad federal civil rights enforcement efforts and works to uphold the civil and constitutional rights of all who live in America. Assistant Attorney General Clarke is a lifelong civil rights lawyer who has spent her entire career in public service.

Assistant Attorney General Clarke began her career as a trial attorney in the Civil Rights Division through the Department of Justice’s Honors Program. In 2006, she joined the NAACP Legal Defense Fund, where she helped lead the organization’s work in the areas of voting rights and election law across the country. Ms. Clarke worked on cases defending the constitutionality of the Voting Rights Act, presented oral argument to the D.C. District Court in Shelby County, Alabama v. Holder, and has provided testimony on federal and state voting rights legislation. In 2011, she was named the head of the Civil Rights Bureau for the New York State Attorney General’s Office, where she led broad civil rights enforcement actions. Under her leadership, the Bureau secured landmark agreements with banks to address unlawful redlining, employers to address barriers to reentry for people with criminal backgrounds, police departments on reforms to policies and practices, major retailers on racial profiling of consumers, landlords on discriminatory housing policies, school districts concerning issues relating to the school-to-prison pipeline and more. In 2015, Ms. Clarke was named the president and executive director of the Lawyers’ Committee for Civil Rights Under Law, one of the nation’s leading civil rights organizations founded at the request of John F. Kennedy. There, she led the organization’s legal work in courts across the country addressing some of the nation’s most complex racial justice and civil rights challenges.

Assistant Attorney General Clarke was born in Brooklyn, New York. After graduating from Choate Rosemary Hall, she received her A.B. from Harvard University and her J.D. from Columbia Law School.